HomeRecent BlogsCBD is Turning Up Everywhere – But is it Allowed?

CBD is Turning Up Everywhere – But is it Allowed?

One of the hottest trends in many industries is the addition of cannabis-derived extracts to consumer product formulas.  This is likely driven by the widespread popularity of local and state attempts to legalize medical or recreational marijuana use.  The personal care product industry is no exception to the trend, as any number of new product lines from moisturizers to mascara are being released with cannabis extracts in their formulations.  Cannabidiol (CBD) is turning up in all types of consumer food and drink products, from honey to craft beers.

The cannabis plant contains over 113 known cannabinoids, or naturally-occurring compounds that interact with receptors in the human body, including cannabidiol (CBD) and THC. Since psychoactive effects are often attributed to the THC ingredient, it is generally avoided in consumer products, but CBD is considered to have no psychoactive properties and is becoming a popular ingredient, as is its cousin, hemp seed oil.  Some believe CBD can have health benefits – but more about that later.  In the current confusing state and federal legal environment concerning marijuana, many consumer product companies are wondering, is it legal to include CBD in my products?  The short answer is no. The long answer is “it’s complicated.” And the most important answer is that the environment is changing fast, so in the near future the question may become moot.

To understand the current complications, a little background on cannabis extracts is essential.  First, hemp and marijuana are both varieties of the cannabis sativa plant.  Various cannabis extracts can be sourced from different parts of the cannabis plant in a variety of ways. The most common cannabis extracts used in personal care and many other products are hemp seed oil and CBD oil. Hemp seed oil is produced by cold-pressing the seed of a hemp plant, while CBD oil is generally produced from the leaves and flowering tops of either a marijuana plant or a high-CBD hemp plant. Marijuana has high amounts of THC, the psychoactive ingredient that produces the “high” of marijuana. Hemp, on the other hand, typically contains only trace amounts of THC, but can be bred to have high amounts of CBD. While hemp seed oil differs from CBD oil, the legality of the two are intertwined. In short, hemp seed oil imported from abroad is legal, while hemp seed oil sourced from hemp grown in the United States may be legal in certain circumstances. CBD oil, on the other hand, is at present illegal under federal law under all circumstances.

Sterilized seeds and oil and cake made from the seeds of the cannabis plant (we’ll refer to these as “Hemp Oil” for the sake of simplicity) do not fall under the purview of the Controlled Substances Act (the CSA), which regulates federal U.S. drug policy. Hemp Oil is not deemed to be a controlled substance, so the production, distribution and possession of Hemp Oil is legal.  However, there are heavy regulations on the cultivation of “industrial hemp” (cannabis plants with THC concentration <0.3% by dry weight) from which Hemp Oil is derived. In simplified terms, Hemp Oil must be either imported into the U.S. or derived from industrial hemp legally grown pursuant to a 2014 Farm Bill. Pursuant to the 2014 Farm Bill, industrial hemp may only be grown for commercial purposes under specific pilot programs that have been adopted in particular states.

Unlike Hemp Oil, CBD is most easily derived from the leaves and flowering tops of cannabis plants.  CBD sourced from the leaves and flowering tops of the marijuana plant is illegal under the CSA, because the leaves and flowers of cannabis plants are not exempt from the definition of the CSA. But CBD can also be derived from industrial hemp, and since the passage of the 2014 Farm Bill it was commonly believed that CBD derived from legally grown industrial hemp would be legal. But it’s not that simple.  In 2017 the DEA implemented a final rule specifically targeting cannabinoid extracts, which includes CBD extract, regardless of its source. The final rule defined a new category of “marihuana extract” under the CSA that specifically rendered cannabinoid extracts a controlled substance illegal in general distribution and use. The DEA reiterated that any such cannabinoid extracts substance “will continue to be treated as Schedule I.”

The legality of the DEA’s new “marihuana extract” definition is questionable, but at present the new category of “marihuana extract” stands under the CSA, making CBD illegal under federal law. Hemp Oil is still legal and available for use in personal care products if imported into the US or grown pursuant to the state-licensed commercial hemp grower pilot programs. In May 2018, the DEA issued an internal directive acknowledging that products and materials made from the cannabis plant that fall outside of the CSA’s definition of marijuana (such as “sterilized seeds incapable of germination, and oil or cake made from the seeds”) can be “sold and otherwise distributed throughout the United States without restriction under the CSA or its implementing regulations.” But this directive does not make CBD legal in the DEA’s view.

Despite the dubious legal status of CBD oil and to a lesser extent Hemp Oil, many companies are choosing to forge ahead and add cannabis extracts to their products. Many such risk-takers believe that DEA enforcement against CBD-containing products is virtually nonexistent, and demand for consumer products containing CBD is high, so the potential risk is outweighed by perceived market benefits.

That conclusion is reinforced because there is a widespread perception that soon all these concerns could go up in smoke. Congress has begun action to remove industrial hemp from the definition of marijuana under the CSA. Such a move would also remove any extracts derived from hemp from the new definition of “marihuana extract.” Reports indicate that Congress may pass the bill before the end of 2018, effectively making CBD oil derived from hemp legal across the United States.  If that comes to pass, the product manufacturers who decided to jump the market and add CBD to their products even when it was legally dubious to do so may feel vindicated. 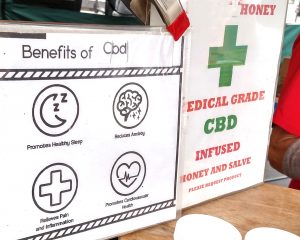 But CBD is not a magic elixir that relieves brand owners from overreaching in their labeling and advertising.  In a future blog post, we’ll address the hazards of claiming health benefits from use of non-medical products, including those containing CBD.

Conkle, Kremer & Engel attorneys stay up to date on important regulatory developments affecting their clients in the manufacturing and resale industries, and are ready to help clients navigate the fast-changing regulatory federal and state landscape.  If you have questions in this or other consumer product regulatory areas, contact CK&E at [email protected] or 310 998-9100.