2012: A Bountiful Year for Prop 65 Plaintiffs and Their Lawyers

Proposition 65 requires that businesses warn about the presence of chemicals believed by the State of California to cause cancer or reproductive harm.  Private citizens may file lawsuits “in the public interest” against businesses alleging a failure to provide the required warning.  Such lawsuits are often filed by private law firms (sometimes called “bounty hunters”), in the names of repeat-plaintiffs like “Center for Environmental Health,”  after sending Notices of Violation. The apparent primary purpose is to obtain quick cash settlements from bewildered, unsuspecting businesses. 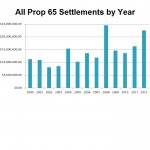 2012 was a particularly “bountiful” year for Prop 65 private plaintiffs, according to data recently released by the California Attorney General’s Office. In 2012, private plaintiffs settled 397 cases.  The settlements totaled nearly $20.5 million. When combined with the additional settlements by District Attorneys and the Attorney General’s Office, there were 437 Prop 65 settlements during 2012, totaling over $22.5 million.  2012 was the second-highest annual dollar total for Prop 65 settlements since 2000, and shows a clear upward trend in the settlements extracted from businesses that receive Prop 65 Notices of Violation.

A lesser-known fact is that private plaintiffs and their attorneys can and do make even more money from Prop 65 settlements.  A portion of each Prop. 65 settlement is supposed to go toward causes or activities that further the purpose of Prop 65, so Prop 65 allows parties to structure some of their civil penalty allocation as a “Payment in Lieu of Penalties” (aka “PILP”).  Some Prop 65 plaintiffs have kept such PILP recoveries to support vaguely stated causes; some Prop 65 plaintiffs have even argued that funding more private litigation itself is activity that furthers the purpose of Prop 65, justifying PILP recoveries from settlements.  In 2012, PILP money made up 13.88% of all private settlements.  That means almost $3 million landed in the hands of private plaintiffs and their attorneys, in addition to the attorneys’ fees and civil penalty bounties they received.

Statewide, there are only a few active Prop 65 plaintiffs.  Aggregated settlement data can be useful in achieving cost-effective resolutions of Prop 65 claims.  CK&E routinely defends businesses who have received Prop 65 Notices of Violation.  CK&E also works with businesses to develop compliance strategies to minimize the risk that they will be future targets of Prop 65 plaintiffs.

This Blog Post was Co-Authored by Jackson McNeill, Law Clerk, UCLA School of Law, Class of 2014