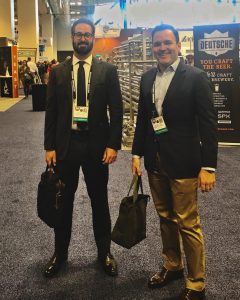 Attorneys Evan Pitchford and Zachary Page of Conkle, Kremer & Engel will be attending the 2018 Craft Brewers Conference and BrewExpo America in Nashville, Tennessee from April 30 to May 3.  The Conference, presented by the Brewers Association trade group, is one of the largest craft brewing-centric trade shows in the world, with thousands of industry professionals and exhibitors in attendance annually.

Mr. Pitchford and Mr. Page will attend to take meetings and keep abreast of the latest industry trends, including legal developments, craft brewing distribution and business issues, and evolving beer styles.  Conkle, Kremer & Engel brings its expertise to bear on a number of beer industry-specific issues, such as brand protection and intellectual property, distribution and vendor relations, regulatory issues, advertising and labeling, employment law, and litigation and alternative dispute resolution in state and federal courts.

If you’re an industry professional or craft beer-related business who will be at the Craft Brewers Conference and would like to connect with Mr. Pitchford and Mr. Page before, during, or after the event, please contact them at e.pitchford@conklelaw.com and z.page@conklelaw.com.  They would be happy to arrange initial discussions about particular issues you may be facing.

In a recent blog post, we discussed beer self-distribution rules in California.  While the self-distribution laws in California are generally quite accommodating, and self-distribution works for a start-up craft brewery with limited funds, on a practical level it can only serve a relatively small geographical area.  As a brand increases in local popularity and the beer producer wants to expand its footprint and accelerate its competition with brands and beers outside its home region, usually the producer will choose to enter into a distribution agreement with an established third-party wholesaler.  When a beer producer chooses to contract with a distributor, then it is important to be aware of the applicable beer franchise laws (which also vary from state to state).  Beer franchise laws control the relationship between the brewer and the wholesaler and will generally trump contract terms that do not comport with such laws.

Beer franchise laws stem from a decades-old period when relatively few national-level breweries (like Budweiser and Miller) were able to exert significant power over the beer distribution industry, which at the time was chiefly comprised of numerous small mom-and-pop outlets.  As an example, the macrobreweries would impose stringent requirements for their distributors that necessitated significant investment (such as construction and maintenance of a sophisticated refrigerated warehouse), but there was nothing to protect the distributor when the macrobreweries decided to switch to a competitor, leaving the distributors with little recourse to recoup their investment.  To protect the distributors from this predicament, strong state franchise laws were enacted that made it difficult for the breweries to terminate contracts with distributors.

At their most draconian, beer franchise laws can marry a brewer to a distributor even if the brewer only sends a small initial amount of beer to the distributor for resale without any written agreement whatsoever.  In some cases distributors can even have the power to transfer the distribution rights to successors-in-interest without the brewer’s consent.  In many states, a brewer can only cancel a distribution contract for “good cause,” which may not include failure to reach sales quotas.  Further, many states require a brewer, in order to break a distribution contract, to pay the wholesaler Fair Market Value (“FMV”) for the lost business.  Of course, these rules have shifted a significant share of power to the distributors.

As the franchise laws weren’t enacted with the microbrewing phenomenon in mind, they can make distribution difficult for craft brewers that don’t have the clout of a national macrobrew and who don’t impose stringent requirements on their distributors.  In certain situations, a small brand may feel that a distributor is paying attention to other more established brands and that it is not getting the benefit of its bargain with the distributor.  However, many beer franchise laws have been softened over the past several years, allowing for more competition in the wholesale market and giving fledgling breweries more choice and control over the terms of their third-party distribution.  For example, some states exempt breweries that produce less than certain annual volumes from the franchise laws.  Of course, exemptions like this mean that brewers need to be conscious of their plans to grow and potentially exceed those volume limitations, and consider how it will affect their distribution agreements.

California’s beer franchise laws are some of the most accommodating in the country, because California allows the distribution agreement itself to control most of the important terms and dealings between the brewer and the wholesaler.  In California, a brewer must enter into exclusive written territorial agreements with distributors that are filed with the ABC (Cal. Bus. & Prof. Code § 25000.5).  California’s franchise laws do not restrict brewers to only “good cause” terminations (though the distributors themselves may very well fight for some type of good-cause requirement in contract negotiations).  Further, a brewer can terminate a distribution agreement if the wholesaler fails to meet a “commercially reasonable” sales goal or quota (Cal. Bus. & Prof. Code § 25000.7), and many beer distribution agreements call for the distributor itself to come up with an annual business plan that establishes sales goals based on certain data.  Except in certain situations, a brewer does not need to pay FMV to terminate the relationship (though again, a distributor may insist on a termination payment as a contract term).  While a brewer is not automatically bound by contract to a purchaser or transferee of its distributor, the brewer cannot unreasonably withhold consent or deny approval of such a transfer without incurring certain charges (Cal. Bus. & Prof. Code § 25000.9).

In California, the parties must be attuned to several important issues in creating the agreement, such as territory, term, change in ownership and transfer rights, termination rights, terms of sale, commercially reasonable sales goals, post-termination provisions, intellectual property licensing and advertising issues, dispute resolution, and other rights and duties of the parties.  Such contract terms are just as important for a brewer as finding a distribution team that is the right “fit” for a growing brand.

Conkle, Kremer & Engel has experience representing both breweries and distributors.  If you are launching a brewery in California, looking to expand your brand’s sales through self-distribution or with a third-party distributor, or have found yourself in a distribution-related dispute, contact Conkle, Kremer & Engel for assistance with those and other beer industry-related issues.