Manufacturers, Distributors and Reps Must Be Familiar with California’s Sales Rep Act

Independent sales representatives are a vital part of many industries, from beauty products and electronics to simple plumbing materials like tankless water heater valves.  Independent sales reps often develop considerable expertise in both the customer base in their territories and their manufacturers’ or distributors’ products, while saving resources that the principal can better use toward product development and customer service after the sale.  Conkle, Kremer & Engel attorneys have extensive experience on behalf of both representatives and manufacturers/distributors/importers in strengthening those agency-principal relationships, and resolving commission, territorial or termination disputes when they arise.

In California, there is a relatively little-known statute that governs certain contractual requirements and responsibilities in a principal-sales representative relationship, called the Independent Wholesale Sales Representatives Contractual Relations Act (the “Sales Rep Act”) (California Civil Code § 1738.10).  The Sales Rep Act can be a powerful tool for sales reps, particularly because it offers the possibility of treble damages and attorney fees awards when the representative prevails.  For example, CK&E was counsel for a sales rep who was cheated out of his earned commissions by a principal who denied that it had ever agreed to pay those commissions.  After a jury trial, the sales rep received a jury award of $2.1 million that was then trebled to $6.2 million, plus attorney fees, after CK&E showed that the Sales Rep Act was properly applied in the situation at hand.  When the judgment was affirmed on appeal, that case became one of the most important published California court decisions about the correct application of the Sales Rep Act.   (Reilly v. Inquest Technology, 218 Cal. App. 4th 536 (2013)).

These two examples demonstrate that intimate knowledge of how the Sales Rep Act operates is crucial for both sides of disputes between sales representatives and importers, manufacturers and distributors.  If you are an independent sales representative, distributor, or manufacturer that is facing commission, territorial or termination disputes, you would be well served to consult with counsel who is familiar with the very precise requirements of the Independent Wholesale Sales Representatives Contractual Relations Act (California Civil Code § 1738.10).

Trade Secrets: Part 2 of CKE Article on Restraints of Trade

As described in earlier posts, Conkle, Kremer & Engel represents commissioned sales representatives (“reps”) and manufacturers or distributors (often termed “principals”) who contract with them.  Contracts drafted by manufacturers or distributors often include post-termination non-competition clauses, which can be tricky for both parties.  California generally disallows non-competition clauses as unlawful restraints of trade, but it is nonetheless possible to have effective trade secret agreements that can substantially restrict a former rep from working with competitors.  In addition, reps and principals often work across state lines and many states allow post-termination non-competition terms that are “reasonable” in scope.  Principals and reps must be conscious of which state’s law controls their agreement, and the state venue in which any dispute would be determined by a court or arbitrator.

CK&E attorney Eric S. Engel earlier contributed an article to the October 2016 edition of Agency Sales Magazine, published by the Manufacturers’ Agents National Association (MANA) to help reps and principals understand and grapple with the non-competition/restraint of trade issues that they face.  In November 2016, the second installment of this article, Trade Secret Protection in Rep Agreements, was published in Agency Sales Magazine to further explain the related issues of trade secret protection in the principal-rep relationship, and how trade secret concerns can limit the ability of a rep to compete with his or her principal during or after termination of the representation.

CK&E is proud to be able to assist reps and principals to negotiate the sometimes difficult legal issues that can help or hinder their effective partnership in serving their customers.

Conkle, Kremer & Engel represents commissioned sales representatives (“reps”) and manufacturers or distributors (often termed “principals”) who contract with them.  Often, contracts drafted by manufacturers or distributors include post-termination non-competition clauses that can be problematic in several respects.  California generally disallows non-competition clauses as unlawful restraints of trade, but it is often possible to have effective trade secret agreements that can substantially restrict a former representatives from working with competitors.  Further, reps and principals often work across state lines, and many states allow post-termination non-competition terms that are “reasonable” in scope.  Principals and reps must be conscious of which state’s law controls their agreement, and the state venue in which any dispute would be determined by a court or arbitrator.  To help reps and principals understand issues that they face, CK&E attorney Eric S. Engel contributed an article to the October 2016 edition of Agency Sales Magazine, published by the Manufacturers’ Agents National Association (MANA).  The October 2016 article, Limiting the Risks of Restraint of Trade, is the first of two parts addressing the enforceability of restraints of trade in various states, and methods to assure that a favorable venue is available if a dispute arises. Next month’s article will focus on the intersection of restraints of trade and trade secret protection.
0

Conkle, Kremer & Engel attorney Eric Engel was pleased to have been invited for a return engagement to present to the Electronic Representatives Association for Southern California, at the ERA SoCal Owners’ Forum in Carlsbad on April 6, 2016.  ERA is the international association of professional manufacturers representatives firms and electronics industry manufacturers who use independent sales reps.  ERA’s member firms sell more than $40 billion annually in electronics products for thousands of manufacturers in industries ranging from consumer to military and aerospace.  ERA SoCal is one of the most proactive chapters in ERA, covering Central California through Los Angeles, Orange and San Diego counties, and extending into Southern Nevada and Mexico.  ERA SoCal sponsors frequent events to promote, educate and protect manufacturer’s representatives.

The theme of this ERA SoCal roundtable forum was “Strengthening Your Hand,” and featured Eric’s presentation on ways that business owners can improve their contracts, business relations and collection rates.  The focus was on avoiding disputes that can lead to litigation, and being prepared to present a strong hand if a dispute does arise.

The open forum included many thoughtful questions and comments by business owners, who shared their industry experiences and challenges they have faced.  In addition to outlining important terms that should be included in written contracts, discussion also concerned the application of the Independent Wholesale Sales Representatives Contractual Relations Act, California Civil Code §§ 1738.10 et seq., a “pro-representative” law in California that requires manufacturers to have a signed written contract with sales reps, and provide written accountings with every payment of commissions.  When a manufacturer willfully fails to comply with requirements of the Act, the sales rep agency is entitled to “treble damages” – three times the unpaid commissions – plus attorney fees.

Eric has handled commission matters for many years, and was lead trial attorney in Reilly v. Inquest Technology.  The Reilly case was the first precedent in California that enforced the full remedy of treble damages under the Act, resulting in $2.1 million jury verdict becoming a judgment for $6.2 million, plus attorney fees and interest.  ERA and its partner organization, Manufacturers’ Agents National Association (MANA), were important sponsors of the Act and similar legislation enacted in about 36 other states to protect the rights of independent wholesale sales representatives.  CK&E is proud to be able to help sales representatives create contracts that protect their rights to be paid for their services, and to help them enforce their rights when disputes arise.

The Conkle firm published an article in the June 30, 2015 edition of the Electronics Representatives Association Southern California’s member newsletter to explain to ERASoCal members the special protections that California law provides for independent wholesale sales representatives.  Among other points, the article describes the requirements for a signed written contract, the types of information that manufacturers and distributors are required to provide to their independent sales reps, and the potential for treble damages (three times the actual damages) plus attorney’s fees for violations.

The article was written by Conkle, Kremer & Engel attorney Eric S. Engel and CK&E’s summer law clerk Ryan Fisher, a student at University of California, Irvine Law School.  CK&E is proud to be a member of ERASoCal, which is a trade association of independent manufacturers sales representative firms in Southern California’s vibrant electronics industry.  Eric has significant experience in sales commission claims, and he was lead trial counsel in the case that resulted in the first published decision in California applying the special protections of Civil Code Section 1738.10 et seq., including treble damages and attorney fees for unpaid sales commissions: Reilly v Inquest Court of Appeal Decision, Case No. G046291 (July 31, 2013)

Conkle, Kremer & Engel attorney Eric S. Engel has extensive experience in matters affecting manufacturers, distributors and sales representatives.  From drafting and negotiating contracts between principals and agents to litigating disputes over such matters as commissions and trade secrets, Eric brings deep knowledge of the dynamics of the independent commissioned sales relationships to the benefit of clients across a wide range of industries.  Among his achievements is leading the trial team to a jury trial verdict and judgment of $6.2 million in treble damages against a manufacturer who cheated a commissioned sales representative.  The judgment was fully upheld on appeal in the precedent-setting decision of Reilly v. Inquest Technology, Inc., 218 Cal. App. 4th 536 (2013).

Eric has been recognized as a “Rep Savvy Attorney” by the Manufacturers & Agents National Association (MANA).  Rep Savvy Attorneys are acknowledged for their acumen in handling disputes involving principals and agents concerning independent commissioned sales relationships.  In that role, Eric is pleased to offer his legal insight through legal articles published in MANA’s monthly magazine, Agency Sales, which receives national distribution.  Most recently, Eric wrote an article on preserving evidence to support your claims and defenses when a dispute arises:  Prove It!  Why Reps and Principals Need to Keep the Evidence, Agency Sales Magazine, May 2015

The Prove It! article focuses on the need to document the significant events that arise in parties’ commercial relationships, starting with a signed written contract that correctly states the terms of the parties’ agreement in a straightforward manner.  Then, events during performance, such as exceptions to the contractual terms and issues in obtaining performance by the other party, should be documented in plain and clear English by email or even by good old letters or faxes.  Documents that were created during the relationship should be carefully saved – a document that once existed but cannot be located can be as bad or worse than a document that never existed in the first place, as it raises the potential for spoliation of evidence penalties that can be very serious.  The Prove It! article is written for agents and principals, but the information contained in the article can be applied to almost any commercial situation.

CK&E attorneys are well versed in commercial disputes of all types and are ready to help you document your position and maintain good records of what you documented, so that you can position yourself as strongly as possible if a dispute arises.

The Conkle Firm Participates in MANA Attorney Forum in Chicago

Conkle, Kremer & Engel attorney Kim Sim participated in the annual Manufacturers’ Agents National Association (MANA) Attorney Forum in Chicago in September 2014.  The MANA Attorney Forum is an annual event for “rep-savvy” attorneys from across the country to meet and discuss legal issues and developments in the law that uniquely affect independent manufacturer’s representatives.

This year’s Attorney Forum covered a wide range of topics including conflicts of interest for sales representatives who represent competing lines, aspects of international law that impact sales representative relationships, successor companies and liability, valuation of rep firms, differences in manufacturers’ representative laws among states, ownership of customer lists and the recent amendment to the Minnesota Commission Protection Act. 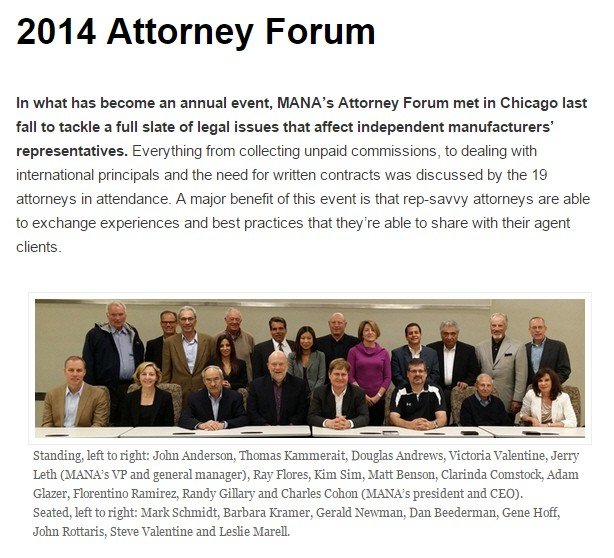